A review by Alyssa Lacross 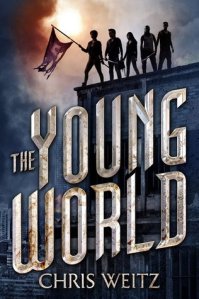 My loving boyfriend (who is not a book lover at all and tends to read exclusively postings on “The Truth About Cars” website) won an ARC of The Young World from our awesome (not-so-local) bookstore The Odyssey while attending a YA Author Panel.

I was a mix of excited and skeptical, the concept sounds great, but another Hollywood-type trying to be an author? (If you are less than familiar with the Hollywood crew, he was the director of New Moon.)

I’m telling you now, this is one of those books you either love or hate…and based on the very teenaged plot and constant references to Google, 2012 top charts songs, Facebook, and partying like it’s the end of the world all meant dreams of my boyfriend picking up this book were zero.

The book is set in post-apocalyptic New York City, where a strange sickness has killed all children and adults, leaving behind only teenagers. The two main characters Jefferson and Donna are part of one of many heavily armed tribes in New York. When Jefferson becomes their tribe’s leader he, Donna, and a misfit gang set out, traveling through lands of other tribes where they are constantly in danger to to try and save humanity and cure the sickness. The book has a lot of action, a little bit of romance, and some things that are just down right strange, all in a way that plays out like a movie script, which is great because the film rights were picked up by Warner Brothers already! I have to say my love of all things YA and my nearly embarrassing appreciation for pop culture means I’m definitely curious.

I don’t think its really a “timeless” book because of the many pop culture references, but in the present it will definitely make some hype once teen readers find it on the shelves of their local libraries and bookstores. Keeping in mind the cliffhanger ending and the adorable potential love story between Jefferson and Donna, they’ll soon be clambering for the sequels too as it is set to be a trilogy.

The book is to be released on July 29th, so check it out!

A little about me ☺

My name is Alyssa Lacross. I’m from Connecticut. I wear many hats, including a children’s and teen librarian hat, at a few libraries in CT and MA while obtaining my Master’s in Library Science with a concentration in School Libraries from Simmons College. I love to read (but only children’s and YA books), binge watch Netflix, listen to the radio (but only in the car) and run (but badly). That’s the boyfriend in the picture with me, since this post came from him winning the book!